This report contains a preview of our ongoing research on EPS company guidance. Some of the statistics and observations suggest this data set could have important alpha relevance and potential for helping to augment asset managers’ return objectives.

Our work has been benefiting from Earnings Per Share (EPS) guidance since the late 1990s with creation of the Earnings Predictor Model, which we re-implemented after September 11, 2001 as Smart Earnings Factor (SEF). Until recently, guidance was more commonly referred to as Pre-Announcement. Nevertheless, from the outset we used a number of parsing techniques to process one the few data sources that contained guidance, the First Call Real Time Estimate feeds, to quantify a range of company releases such as point, range, directional, and the others pre-announcements in order to create predictive earnings models.

Since that work, the earnings landscape and its productive alpha generating ability have experienced a lot of changes. The diminished effectiveness is often attributed to widespread use of earnings factors and regulatory changes enacted to protect investors starting in early 2000. The effect of the former is well documented by academics and practitioners. The following notes point to potential impact of regulatory changes on the usefulness of guidance.

In this preview, we only address EPS guidance for next fiscal year (FY1) and quarterly period (Q1) notwithstanding many companies also guide Wall Street and investors on other measures and fiscal periods. Table 1 displays the low, average, and high statistics for the total number of firms that released earnings guidance from January 1995 to December 2010. Over that period, which covered the enactment of Regulation Fair Disclosure in October 2000 (Reg FD) and Sarbanes Oxley in July 2002 (SOX), there were noticeable changes in the volume of guidance.

Specifically, low volumes occurred in the 1990s followed by significant increases around the enactment of Regulation FD of 2000 and the passage of Sorbane-Oxley Act of 2002. During the decade ending December 2010, the total number of firms directing Wall Street on earnings went up several folds reaching more than 1500 in 2004, according to the Thomson/IBES universe . 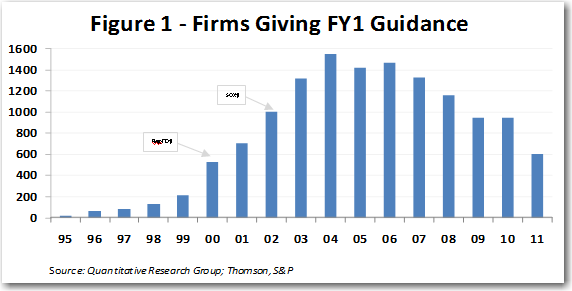 In addition to the significant growth in number of firms managing earnings, there was an important shift in the type of guidance that companies released to investors. As shown in Figure 2, most pre-announcements in the 1990s were for Quarterly information. Q1 guidance flattened in 1997 to 1998 and subsequently continued to decline through the implementation of Reg FD in 2000. By 2003, FY1 had taken the reigns and was on its way to become the dominant measure on which firms provided guidance. 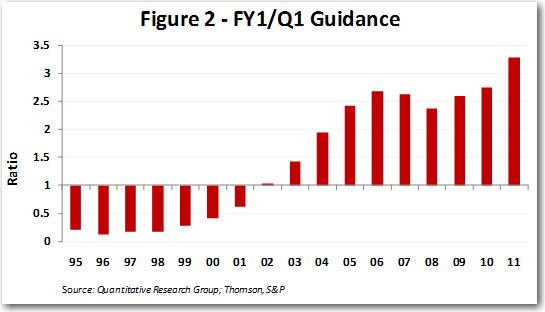 Our objective in working with this data set is to create models that can be exploited in the investment process. Although this research is ongoing, we wanted to pause and share the following observations: