Ninety percent of companies missed analysts’ consensus earnings forecasts over the past 11 years, according to Wall Street.  In other words, companies reported quarterly earnings that were different than those forecasted by the analysts who follow them.  Given the important gap between analyst forecasts and firms quarterly reported earnings, how can investors gain excess returns? 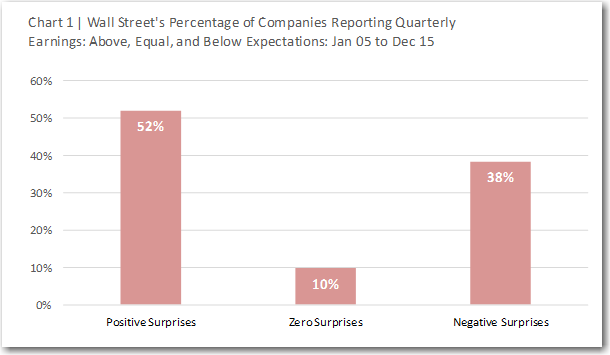 From here on, our discussion will be focused on positive earnings surprises (PES) as defined by Wall Street and widely reported in the financial press every quarter. We examined the average returns of Wall Street’s PES relative to the S&P500 as well as how their performance compares to a more robust definition. Investors might be surprised, pardon the pun, to learn that holding a portfolio of the stocks (52%) that beats analysts’ expectations would have been underwhelming. As indicated in Chart 2, the group of PES stocks generated a mere 1.13 percentage points higher than the S&P500 benchmark. 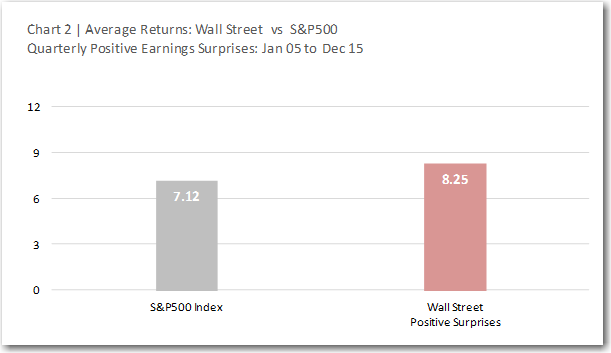 Wall Street PES’ stocks low relative performance suggests there’s some truth to the adage “no one wins, when everyone gets a trophy” or, in this case, no investors win when so many companies post earnings surprises.  Here’s an approach that could help investors to get closer to, if not , in the winner’s circle:  In addition to evaluating whether a company’s reported earnings is above analysts’ expectations, investors should consider factors such as analysts track record/accuracy, earnings per share change, volume, risk-adjustment to surprises, and others measures in their formulation. Using such additional measures help to identify and separate stocks that are more likely to experience sustained post-announcement drift and price improvement.

Let’s evaluate how this “true earnings surprises” approach performed during the indicated eleven year period.  Well, investors would have been significantly better off by holding a portfolio that utilized QRG’s multidimensional formulation. More specifically, that method posted average returns that are approximately five times (5.16%) greater than Wall Street’s (1.13%), relative to the S&P500 benchmark as shown in Chart 3. 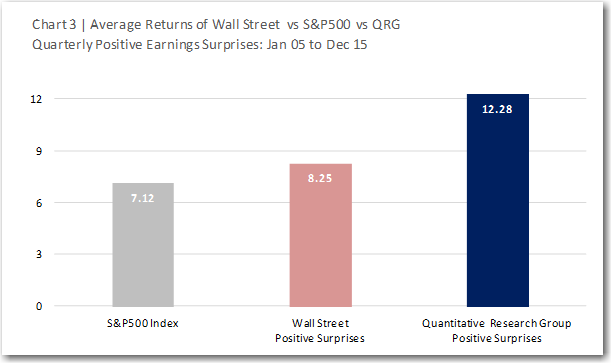